Overwatch creator Blizzard released a developer update video showing off what you can expect for the popular hero shooter through the year. 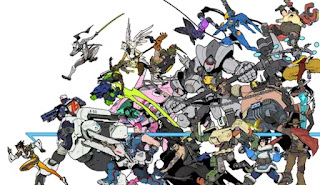 The latest hero to the game, which Overwatch director Jeff Kaplan codenames as “Hero 27” is work in progress. Currently being tested by the team, there’s no release date yet. Kaplan hints that the new hero is “very needed” and the team is prioritising getting it right over shipping it by a specific date.
In addition to this, the Overwatch League begins on January 10 with Overwatch League skins to be added to the game. The BlizzardWorld amusement park map that was revealed at BlizzCon 2017 will be added “very soon” to Overwatch along with skins based on other Blizzard properties such as Diablo, Warcraft, and Starcraft.

xpect more new Overwatch maps in 2018 as Kaplan states they tend to be the most popular additions to the game. Furthermore, standard skins will be added to the year round loot box rotation.
Following up last year’s Lunar Event that celebrated the Year of the Rooster, 2018 in Overwatch sees the Year of the Dog as the next Lunar New Year event and it’ll have “significant content players will be very happy with.”
April 2018 should see Uprising return as well. It will incorporate feedback from the 2017 debut . Kaplan teased some “really big ideas” as well as it being “evolved” over the past Uprising event. This lore-based event celebrated the anniversary of Overwatch’s release and was a chance to get rare dance emotes and legendary skins, all of which will return along with new items in 2018.


As for Overwatch lore, Kaplan said the team wants to show what happened to other heroes when Winston issued a recall signal to all Overwatch operatives. More animated shorts and comics explaining this in the year to come.
And for those interested in the Overwatch Competitive mode, Kaplan confirmed that Overwatch Competitive Season 8 will see greater ramifications as the team is considering long term “big picture” changes. Blizzard’s approach has been to make smaller, tactical changes in response to player feedback, so it will be interesting to see what’s different when Overwatch Competitive Season 8 rolls out.
Finer details on all these plans would be announced closer to their roll out dates. With three newheroes, new maps, new cinematics, and new game modes added to Overwatch in 2017, will Blizzard have a greater output? Or will the focus be on tweaking what the e-sports crowd wants? So far it’s managed to balance both and 2018 appears to be consistent in this regard.
Please Subscribe to my youtube channel Gogetyours https://www.youtube.com/c/Gogetyours
at January 03, 2018