Celebrating its third anniversary in India, OnePlus on Monday announced the OnePlus 5T Star Wars Limited Edition in association with Star Wars: The Last Jedi that is due to release next week. The new Limited Edition OnePlus 5T was showcased on Saturday at the Comic-Con event in Bengaluru. OnePlus is hosting an event in Mumbai on December 14 at 7pm at IMAX Wadala in Mumbai, to formally launch the latest entrant, tickets for which will be available to the general public at Rs. 999 starting 10am, December 7. 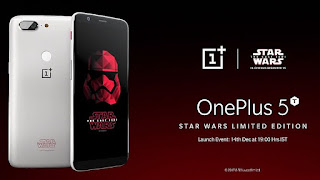 The OnePlus 5T Star Wars Limited Edition will go sale on Amazon.in, OnePlusStore.in, and OnePlus experience zones in Bengaluru, and Noida from December 15 - the same day as The Last Jedi's release in India. Details about its price and storage variants are yet to be revealed.
OnePlus has provided a white back on OnePlus 5T Limited Edition along with a Star Wars logo. The alert slider on the left has also received a red-colour paint job. Besides, as per an official teaser video on YouTube, the smartphone includes a Stormtrooper wallpaper that matches the deep black front.
Specifications of the OnePlus 5T Star Wars Limited Edition are likely to be identical to its original version that was launched in India last month with a starting price tag of Rs. 32,999. The flagship features a 6.01-inch Full Optic AMOLED display with full-HD+ (1080x2160 pixels) resolution and 18:9 aspect ratio. It is powered by a 2.5GHz octa-core Qualcomm Snapdragon 835 SoC, coupled with up to 8GB RAM and 128GB onboard storage. The handset sports a rear-facing fingerprint scanner and a pre-installed Face Unlock feature.
The OnePlus 5T has a dual-camera setup with a 16-megapixel IMX398 sensor and a 20-megapixel Sony IMX350 sensor along with f/1.7 aperture lenses. A 16-megapixel Sony IMX371 sensor is available on the front. It packs a 3300mAh battery that supports fast charging through the company's Dash Charge technology. The OnePlus 5T originally debuted with Android Nougat-based Oxygen 4.7.1 but released OxygenOS 4.7.2 a couple of weeks ago with improvements for fingerprint and face unlock features.
Last week, OnePlus launched the OnePlus 5T 'Lava Red' Limited Edition in China with a red colour back panel. That new variant is listed on the company's China site alongside the original 'Midnight Black' option.
PLEASE SUBSCRIBE To My YouTube Channel
► https://www.youtube.com/c/Gogetyours
Follow me on
► instagram https://www.instagram.com/gogetyoursr...