Gionee M7 Power was launched in India on Wednesday. As you can tell by the name of the smartphone, the M7 Power's biggest highlight is its massive 5000mAh battery. It also sports a large 6-inch FullView display with an 18:9 aspect ratio. To recall, the smartphone was first launchedby Gionee in China in September, alongside the Gionee M7. There's no word as to when the Gionee M7 will be launched in India. 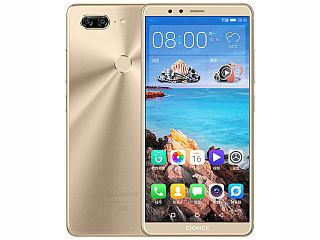 The Gionee M7 Power price in India is Rs. 16,999, and it will go on sale from November 25 via Amazon India. Pre-orders start via Amazon India at 5pm IST on Friday, and more launch offers will be detailed by the company. It will be available in Gold, Blue, and Black colour variants.
On pre-booking Gionee M7 Power, users will get a free one-time screen replacement (valid for six months). Buyers will get up to 100GB of complimentary data from Reliance Jio, with 10GB extra for 10 recharges (above Rs. 309) up till September 2018, along with additional exchange discount of Rs. 3,000 and no-cost EMIs. The Chinese brand has also partnered with Paytm, and said in a release, "Every purchase of Gionee M7 Power will come with 2 Paytm Cashback Voucher Codes entitling customers with Rs. 250 cashback on a base buy of Rs. 350 from Paytm Mall."

The dual-SIM Gionee M7 Power runs Amigo 5.0 based on Android 7.1.1 Nougat. It sports a 6-inch HD+ (720x1440 pixels) FullView IPS display with an 18:9 aspect ratio and Gorilla Glass 3. It is powered by a 1.4GHz octa-core Snapdragon 435 SoC coupled with 4GB of RAM. It has a fingerprint sensor on the rear panel.
The Gionee M7 Power bears a 13-megapixel autofocus rear camera with an f/2.0 aperture complete with LED flash, and on the front, it bears an 8-megapixel fixed focus camera with an f/2.2 aperture. The smartphone comes with 64GB of inbuilt storage, expandable via microSD card (up to 256GB) in a hybrid dual-SIM configuration.
Connectivity options on the Gionee M7 Power include 4G VoLTE, Wi-Fi 802.11 b/g/n, Bluetooth v4.1, GPS/ A-GPS, FM radio, Micro-USB, and a 3.5mm headphone jack. The M7 Power runs on a 5000mAh battery that's rated to provide up to 56 hours of talk time, and 625 hours of standby time. It weighs 199 grams, and measures 156.35x76.65x8.6mm. The company is also touting the App Clone feature, which lets you use three instances of WhatsApp at once.
PLEASE SUBSCRIBE To My YouTube Channel
► https://www.youtube.com/c/Gogetyours
Follow me on