In a nutshell: The Sony KDL-50W805C is a 50-inch TV with superb picture quality that costs around £600. It's not UHD (4K), but that doesn't worry us in the least when the image quality is this compelling. Low input lag makes this a top choice for gamers too. Only the slow, piecemeal roll-out of its Android TV system gives us any concern about

Sony's W80C series of TVs for 2015 are modelled on last year's W829B, and come in three colour styles. The W805C reviewed here has a black frame, with an open-style silver mirror stand. The W807Chas a silver frame and stand, and the W809C has a black frame with a matching dark chrome stand.
We like all three colour options, and the design is impressive. The ultra narrow bezel and super slimline design give a light, airy and very contemporary look, and these are televisions that will blend seamlessly into any style of room. Aluminium accents on the frame lend a touch of class, and the almost edge-to-edge picture gives the illusion of a floating image, and makes the unit more compact.
The metal stand doesn't swivel, but seems solid enough, despite its thinness. A discreet Sony logo below the screen gives subtle glows when functions are accessed.
The TV is very energy efficient too, rated A+ and using as little as 72W in its most economical mode.
A conventional remote control is supplied with the TV and an optional One-Flick remote can be purchased as an extra, for use with Smart TV.

We've been impressed by the quality of Sony's TVs for the past couple of years for all kinds of reasons, and when it comes to picture quality, the W805C delivers superbly impressive results.
The first thing to note is that this is not a UHD (4K) TV, but has a Full HD (1080p) resolution. There are good reasons why 4K is the future, but in the present, there are plenty of reasons to stick with 1080p. First up is the almost complete lack of 4K content at present. Although Netflix is beginning to stream UHD content, it's very limited, and you'll need superfast broadband to receive it. When compressed for streaming, 4K quality may not even be as good as today's Blu-Ray. Gamers too, won't appreciate 4K, as the upscaling required makes screens less responsive. So we're not at all saddened by the lack of UHD in this 50-inch TV, especially since it keeps the price down.
The W80C/W85C series is Sony's top-end Full HD range for 2015. In fact, this is one of the best 50-inch screens you can get. Despite the use of edge backlighting, there are no issues with backlight bleed, and the lighting appears uniform. The VA-type panel generates very deep blacks, and in combination with the dynamic backlight control, manages to produce quite stunning pictures with very high dynamic contrast. With a Blu-Ray source, you'll be blown away by the quality of this TV, despite its lack of 4K.
The screen is highly responsive, with a fast native response and an 800Hz Motionflow interpolation system to smooth out any jerkiness. It's ideal for gamers too, with a very low input lag when used in game mode.
Sony's X-Reality PRO engine is effective at upscaling input from standard definition broadcast, although low quality terrestrial broadcast can look rather poor when blown up to such a large size. We recommend turning down some of the motion interpolation algorithms from their most aggressive settings, as they tend to introduce unwelcome artifacts.

The TV also supports quite wide viewing angles - much better than Samsung's Series 6 range of TVs, and on a par with IPS and plasma displays. You can view the screen from very wide angles without noticing any significant loss of colour or contrast.

Overall, this is perhaps the best you can get in 1080p, and marks a high point in picture
quality. 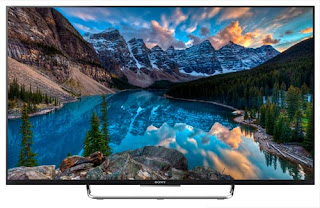