Bixby 2.0 With Ambitions to Take on Amazon's Alexa 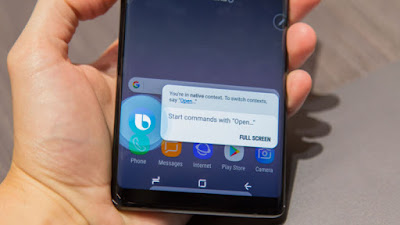 Samsung on Wednesday announced it is upgrading its Bixby digital assistant and making it available for a range of connected devices, setting up a clash with Amazon's Alexa and others competing for leadership in artificial intelligence.
The South Korean electronics giant, which is the world's biggest smartphone maker, launched Bixby last year but only for its own flagship Galaxy handsets.
The new Bixby 2.0 will be open to developers in a move to put the personal assistant on more devices, the company announced at its developer conference in San Francisco.
"Bixby 2.0 will be ubiquitous, available on any and all devices," said Eui-Suk Chung, Samsung executive vice president, in a blogpost.
"This means having the intelligence of Bixby, powered by the cloud, act as the control hub of your device ecosystem, including mobile phones, TVs, refrigerators, home speakers, or any other connected technology you can imagine."
The move puts Samsung and Bixby squarely in competition with Alexa, the artificial intelligence program powering Amazon's connected speakers and on many third-party devices including appliances and cars.
Also competing in the space are Google and Microsoft, which have their own digital assistants that can be used for smart homes and connected vehicles.
While the first iteration of Bixby drew mixed reviews, Chung said the 2.0 version will be "a powerful intelligent assistant platform that will bring a connected experience that is ubiquitous, personal, and open."
He called Bixby 2.0 "a fundamental leap forward" for digital assistants.
"Today's assistants are useful, but ultimately still play a limited role in people's lives," Chung said.
"People use them to set timers and reminders, answer trivial questions, etc. We see a world where digital assistants play a bigger role, an intelligent role, where one day everything from our phones, to our fridge, to our sprinkler system will have some sort of intelligence to help us seamlessly interact with all the technology we use each day."
When Bixby was introduced, it was billed as a system to control nearly all tasks in smartphone applications to make the devices simpler to control.
Samsung last year bought Viv, an artificial intelligence startup with co-founders who were part of the team that built virtual assistant Siri, used in Apple devices.
Speaking at the WSJD Live conference this week, Samsung Next president David Eun said, "When we think about Bixby, we don't think about it as a voice gateway on a single device. We think of it as a service across all devices in the home -- TVs, appliances, even cars."
SUBSCRIBE ► https://www.youtube.com/c/Gogetyours Follow me on ► instagram https://www.instagram.com/gogetyoursr... ► twitter https://twitter.com/gogetyourreview ► Facebook https://www.facebook.com/gogetyoursre..
at October 19, 2017